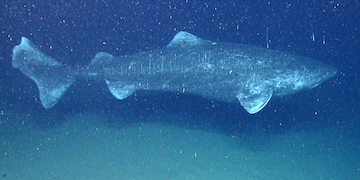 The Greenland shark can measure 16 feet or longer. But it takes a long time to reach that size. In the cold North Atlantic, the creatures grow slowly -- a fraction of an inch per year. That means the oldest Greenland sharks could be centuries old -- the longest-living vertebrates on the planet.

Recent studies have shown that several species of shark can live much longer than expected.

Biologists have measured shark ages by counting layers of calcium carbonate on their vertebrae -- like counting tree rings. But those layers appear to stop growing as the sharks get older. So scientists have been using some new techniques.

Researchers in New Zealand, for example, spent a decade measuring the growth rates of a group of whale sharks -- the largest of all sharks. From that rate, they estimated that the sharks could live to an age of 130.

For the Greenland sharks, researchers looked for radioactive elements in the eyes of dead sharks. The elements entered the atmosphere during nuclear bomb tests. Any shark born after those tests began shows a certain amount of the elements, with the exact amount revealing the year they were born.

The researchers noted the sizes of the sharks that showed these elements. They then used the size of Greenland sharks at birth to calculate how fast they grow. From that, they estimated that the oldest shark in their sample had lived to about 400. Uncertainties, though, mean it could have been as old as 500 -- an ancient giant from the sea.