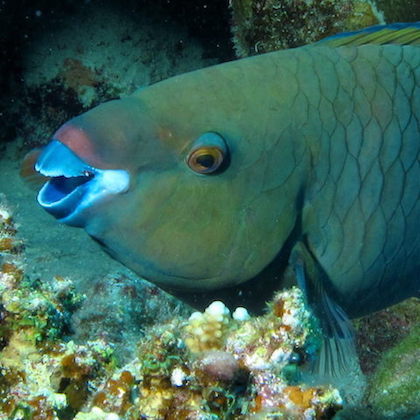 Parrotfish have two sets of teeth, one in front, that looks like a bird's beak and another within its neck. Photo Credit: Derek Keats/ Attribution 2.0 Generic

When you bite into an ear of corn, you’re after the juicy kernels. But if you get a little too enthusiastic, you can get some of the cob, too.

One type of fish always bites into the cob. The parrotfish eats the living parts of coral, as well as algae on the coral. To get the good stuff, though, it has to bite into the coral skeleton -- a structure that’s like rock. That’s tough on the teeth. But a recent study says those teeth are well designed for the job. They’re hard, stiff, and they seldom break.

Parrotfish live on coral reefs around the world. They have two sets of teeth. One set, at the front of the mouth, looks like a parrot’s beak, and is used for biting into the coral. The other set, in the throat, grinds up the coral. The fish then digests the edible parts and poops the hard coral skeleton -- forming grains of sand.

Researchers studied the teeth that make up the beak. They used high-tech X-ray machines and a 3-D imaging system. They found that the teeth consist of tiny crystal plates made of one of the hardest and strongest minerals found in any living organism. The crystals are arranged in bundles that are woven together with other bundles. The crystals are smaller near the tip, which is the hardest and strongest part of the tooth.

The combination of material and structure creates teeth that are hard and strong, and that don’t easily chip. And that same combination someday could be used to make tough materials for human use -- inspired by a fish that chews up rocks.