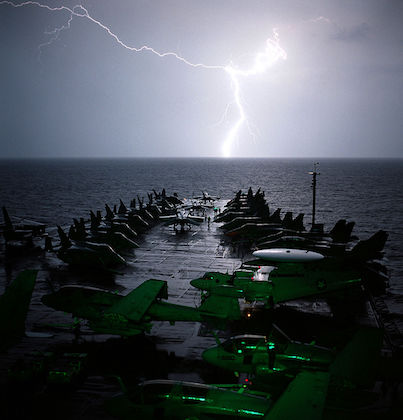 The big ships that ply the Indian Ocean and South China Sea help power the world’s economy. And they also may help power the weather. In particular, they may “seed” the formation of tall clouds that produce lightning -- twice as much lightning along their shipping lanes as in the surrounding ocean.

Researchers were mapping lightning strikes in that part of the world when they noticed something odd: two straight lines where there were far more lightning strikes than average. They compared those maps with traffic along the shipping lanes, and found that the two matched perfectly.

The ships themselves probably account for the extra activity. They don’t actually produce lightning. Instead, they belch out solid particles that form the “seeds” for raindrops.

Their diesel fuel contains a lot of sulfur. Small particles of the sulfur climb high into the atmosphere. Water vapor coalesces around them, forming droplets. These droplets are smaller than those formed around other particles, so they’re carried higher into the atmosphere. They climb high enough, in fact, that they freeze. As these tiny ice crystals move, they generate an electric field. Eventually, that creates a discharge: a bolt of lightning.

The researchers haven’t found a relationship between ships and lightning in other oceans. Shipping lanes elsewhere may be wider, or they may not carry as much traffic. And conditions in the Indian Ocean and South China Sea are better for building tall clouds -- including those powered by ships.