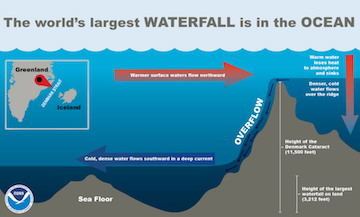 A diagram of how the submerged waterfall works. Photo Credit: National Oceanic and Atmospheric Administration

James Bond, Indiana Jones, and other action heroes can’t seem to avoid waterfalls. They plummet down them, or they just miss them, narrowly avoiding a gruesome fate.

But no hero has taken the plunge down the world’s tallest waterfall -- and probably won’t anytime soon. That’s because it’s under water -- a two-mile drop between Greenland and Iceland.

You might think that a submerged waterfall is impossible, but it’s not. That’s because ocean water isn’t all the same. Instead, different layers and currents have different temperatures, which means they have different densities. Cold water is dense, so it sinks to the bottom. Warm water, on the other hand, is lighter, so it stays near the surface.

In the Denmark Strait, a warm surface current flows northward between Greenland and Iceland. As it passes to the north of Iceland it cools off. The cooler, denser water then sinks, joining a current below the surface that flows to the south.

This current tumbles over a ridge that’s a hundred miles wide and 11,500 feet high, forming the waterfall -- the Denmark Strait Cataract. It’s almost four times the height of Angel Falls in Venezuela, the tallest waterfall on land.

Enough water pours over the cataract to fill Lake Superior, the largest of the Great Lakes, in about a month. After that, it forms a current along the bottom of the Atlantic Ocean. It carries at least 20 times as much water as all the rivers that empty from land into the Atlantic -- a massive current on the bottom of the sea.