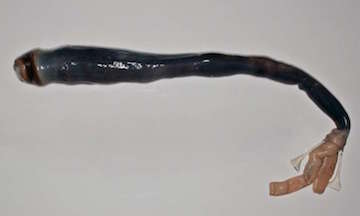 We humans have been known to eat some pungent foods, from boiled cabbage to brussels sprouts to limburger-and-onion sandwiches. But a mollusk that lives in the mud at the bottom of a Philippine lagoon tops them all. It gets by on hydrogen sulfide -- a nasty gas that smells like rotten eggs. Or to be more precise, bacteria that live in its gills consume the hydrogen sulfide and convert it to a more palatable form.

The mollusk is known as the giant shipworm. It’s not really a worm, but it kind of looks like one -- a big one: it can be up to five feet long. It’s a relative of smaller shipworms, which eat trees that have washed out to sea, the hulls of boats, and other wooden delicacies.

Until recently, scientists had never studied the giant shipworm. They’d seen the long, tusk-like shell that it makes, but never the organism itself. But in 2010, a scientist saw pictures of them in a documentary on Philippine television. A group of colleagues organized an expedition to gather a few specimens. The shipworms live at the bottom of a shallow lagoon. The sediments are rich in rotting materials, which produce the hydrogen sulfide.

The scientists found that the shipworm’s digestive system isn’t well developed. Instead, the worms have unusually large gills, which house colonies of bacteria. The bacteria consume the hydrogen sulfide, then produce organic carbon, which feeds the shipworms. So the giant shipworm survives off the byproducts of bacteria that eat one of the stinkiest meals around.