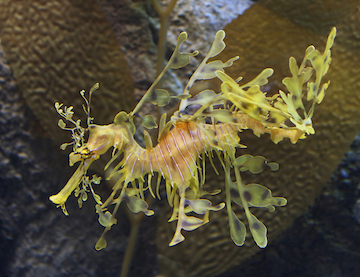 Many marine creatures hang out in beds of seagrass or kelp to hide from predators or prey. But the leafy seadragon beats them all. It’s covered with leafy appendages that make it look like a bit of kelp. And it floats along with the currents just like the kelp, so it’s hard for either prey or predator to pick it out.

The leafy seadragon is a relative of the seahorse. It’s found in mild waters along the southern coast of Australia, at depths of up to a hundred feet. An adult can be more than a foot long, most of which consists of the leafy fronds that cover its body. It usually stays in one place, although small fins on its neck and back allow it to creep over the sea floor.

Like the seahorse, the male cares for the eggs. Unlike the seahorse, though, he doesn’t keep them in a pouch. Instead, the female deposits up to about 250 eggs on the underside of his tail. After a couple of months, the male shakes his tail or rubs it against rocks to make the eggs hatch. They hatch in a couple of batches, over a period of a day or two. After that, the youngsters are on their own.

Seadragons face few environmental problems. Coastal pollution is a problem, and because of their appearance, they’re popular among aquarium owners. But regulations in Australia make it illegal to catch or sell them -- only those bred in captivity can be sold. As a result, the leafy seadragon is listed as a least-threatened species, so it’s likely to keep floating with the kelp for a long time to come.