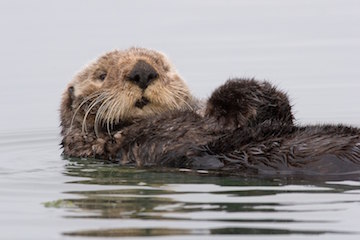 A 2012 census found that the sea otter population in Glacier Bay has grown to over 8,000. Photo Credit: Michael L. Baird

When sea otters decided to move into Glacier Bay in Alaska, they didn’t mess around. They first appeared in the bay in the 1990s -- more than two centuries after they’d been hunted to near extinction. But by the time of the most recent census, in 2012, the population had soared to more than 8,000 -- an increase of more than 40 percent per year.

In the early 1700s, as many as a few hundred thousand sea otters inhabited the north Pacific, most of them from Alaska down to northern California. But their fur became a popular luxury item in the United States, Europe, and China. So by the early 1900s, hunters had wiped out all but a couple of thousand of them.

The otters and other marine mammals were given protection by a 1911 treaty, and the population began to grow. The cute critters spread down the southern coast of Alaska, but Glacier Bay remained otter-less. In fact, the first otters didn’t show up there until 1993. But since then, they’ve thrived.

Today, biologists are keeping an eye on the otters. They’re learning not just about the otters themselves, but about their effects on the bay’s ecosystem. The otters eat crabs, clams, mussels, and sea urchins they snatch from the bottom of the bay -- up to 25 percent of their own body weight every day. Since an adult can weigh 45 to 90 pounds, that adds up to a lot of seafood. How well the food supply holds up will help determine how long the sea otters can keep multiplying in Glacier Bay.