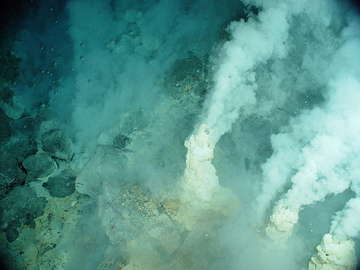 An active seamount within the Mariana Arc, caused by the shifting of the Earth's crusts. Photo Credit: National Oceanic and Atmospheric Administration

One of the most geologically active regions on Earth is at the western edge of the Pacific Ocean, along a chain of volcanic mountains both above and below the ocean surface. The Mariana Arc includes more than 60 underwater volcanoes, known as seamounts. And scientists have seen big changes along that arc in recent years.

The activity is caused by the motions of two of the plates that make up Earth’s crust. One plate is plunging below the other. The intersection between them has created the deepest spot in the oceans, a canyon known as the Mariana Trench.

As the lower plate pushes deeper, some of its rock melts. Some of the magma then pushes back toward the surface, forming the seamounts and the exposed islands.

Expeditions in 2004 and 2006 discovered that many of the seamounts were active. They also saw a feature that emitted a stream of liquid carbon dioxide, and two pools of dark liquid sulfur covered by thin crusts -- features seen nowhere else on the planet. Expeditions in more recent years found big changes. Some of the active seamounts had shut down, while some that were inactive had started erupting.

All the expeditions found abundant life in that seemingly hostile environment, including fish, crabs, and tubeworms. In fact, in 2009 the U.S., which supervises the Mariana Islands, declared the Mariana Arc a National Wildlife Refuge -- a busy habitat that’s constantly changing.