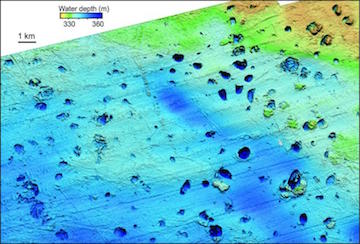 Without a glacier to cap it, methane continues to bubble up through the cracks in the sea floor. Photo Credit: K. Andreassen/Cage https://cage.uit.no/

As the last Ice Age came to an end, big bubbles of gas on the floor of the Barents Sea popped like champagne corks. That left hundreds of craters -- some of them up to two-thirds of a mile across.

Geologists discovered the crater field in the 1990s. It’s about a thousand feet deep in a region north of Norway. The scientists suggested the craters were produced by retreating glaciers. But they didn’t have the tools to study the region in detail.

More recently, though, Norwegian scientists scanned the area with modern sonar and other tools. They found more than a hundred craters that are a thousand feet in diameter or more, and several hundred smaller craters. They also found large pockets of gas below the sea floor. And they found that gas is leaking into the water from about 600 spots.

The scientists say that during the last Ice Age, a glacier rested atop what is now the ocean floor. Methane gas bubbled up toward the bottom of the glacier. The weight of the glacier kept the methane from escaping, so it mixed with water to form a special type of ice.

When the glacier began retreating about 15,000 years ago, the gas built big mounds of the water-methane ice. The ice soon burst in big eruptions, allowing the methane to escape into the water. That process gouged hundreds of craters.

There’s still a lot of methane below the Barents Sea. Without the glacier to cap it, though, it simply bubbles up through the cracks in the sea floor -- like the bubbles in a glass of champagne after the bottle blew its cork.