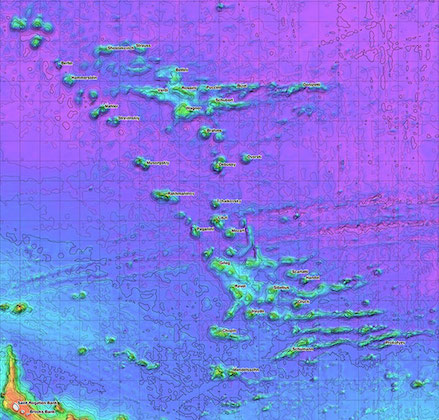 Each of the individual seamounts in the chain are named for classical composers. Photo Credit: National Oceanic and Atmospheric Administration

In the summer of 2017, a research expedition took a good look at a string of underwater mountains north of Hawaii. Scientists used sonar to map the volcanic mountains, known as seamounts, which formed tens of millions of years ago. And they found a profusion of life on and around the mountains -- corals, jellyfish, sea stars, sea spiders, and a bright red sea toad. They’ll be studying the findings for years.

The expedition was known as Deep-Sea Symphony -- not for the musical precision of its work, but for the mountains it was exploring: Musicians Seamounts. The chain is 750 miles long and consists of about three dozen peaks. Each of them tops out thousands of feet below the surface.

Individual seamounts in the chain are named for classical composers -- from Strauss and Shostakovich in the northwest to Prokofiev in the southeast, with Mozart, Brahms, Chopin, and many others in between.

The theme was proposed in 1959 by Henry Menard, a scientist at the Scripps Institution of Oceanography. His group had mapped that region of the ocean floor using sonar developed during World War II. Scientists were finding so many seamounts that they couldn’t name them all. So they named groups of them for musicians, geologists, and others. The individual names were filled in later.

Today, the names of features on the ocean floor are adopted by an international scientific body, following a set of guidelines. That makes sure that scientists hit all the right notes as they map the world’s oceans.