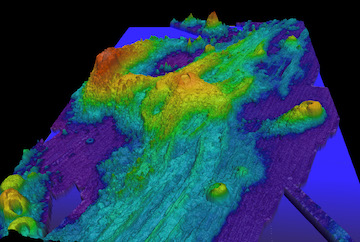 Scientists have rules for naming everything from mushrooms to ice floes on Pluto. And that includes features on the bottom of the ocean: volcanoes, canyons, reefs, and many others.

For most of human history, naming features on the sea floor wasn’t a problem. With a few exceptions, the features were hidden from view. And that didn’t change in a major way until the invention of sonar in the last century, allowing scientists to discover thousands of features.

Individual scientists named many of the newly found features. But that created some confusion. Several features might share a name, for example, or one feature might have several names.

So in 1975, scientists created an international committee to assign names to features found outside the waters of individual countries. The committee develops guidelines for assigning names. And it works to align its names with those assigned by other groups over the years.

The guidelines say that names should be short, simple, and easy to use. They can honor scientists or others involved with marine exploration, or ships used to discover features. Groups of features can be given a collective name, with individual features following the theme. A chain of underwater volcanoes, for example, is known as Electricians Seamounts. Individual summits in the chain are named for scientists who did important work in the field of electricity, such as Volta and Ampere.

These guidelines help bring a little order to the amazing landscape at the bottom of the ocean.