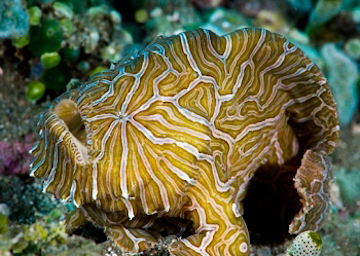 Fish find lots of ways to get around: They swim, they crawl, they attach themselves to other organisms and go along for the ride. But the way a fish that was discovered a decade ago gets around, you might think it got a hold of some fermented kelp: It bounces off the ocean floor like a beach ball. Combined with its colorful appearance, that earned it the name Historiophryne psychedelica: the psychedelic frogfish.

The little fish was discovered in Indonesia in January of 2008. It has a flat face, with eyes that face forward. That may give it stereo vision similar to our own. A thick skin protects it from the sharp coral as it squirms through small openings on the reef in search of food or shelter.

Bright stripes of tan and yellow swirl from the face to the tail. They may be like fingerprints -- they’re different for every individual.

What really sets psychedelica apart, though, is the way it gets around. Fins on the bottom of its body act like legs, pushing the fish up and forward every time it touches down. At the same time, the fish squirts water through its gills, giving it jet propulsion. The combination makes it “hop” across the bottom like a bouncing ball.

The bounces aren’t as regular as those of a ball, though -- the fish lurches in a different direction with each bounce. That may be because it keeps its tail curled around its body, so it can’t control which way it’s going.

So psychedelica moves like no other fish yet seen -- a colorful ball bouncing across the bottom of the sea.