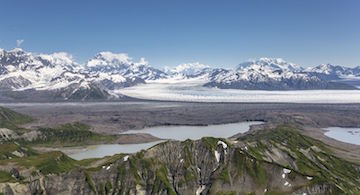 Climate scientists are debating just how much global sea level will rise by the end of the 21st century. Projections range from less than a foot to more than six feet.

Another rapid rise in sea level took place about 8200 years ago. And the water might have come from a single source: a giant lake that stretched from present-day North Dakota and Minnesota through much of central Canada.

Glaciers across North America began to retreat about 13,000 years ago, at the end of the last ice age. Melting ice pooled behind the northern edge of the glaciers, forming a lake. At its peak, Lake Agassiz covered an area larger than all of the modern Great Lakes combined.

Over the centuries, its size varied by a great deal. It sometimes broke through the surrounding ice, allowing its waters to flow down the Mississippi River or into Lake Superior, or to reach the ocean.

One of those breaks might have taken place almost 12,000 years ago. Some studies report that it fed massive amounts of water into the Arctic Ocean -- perhaps causing a period of global cooling that lasted for a thousand years.

A second giant outburst might have taken place 8200 years ago. Research says that event caused global sea level to rise by about three to nine feet in just a century. The massive amount of fresh water blocked the flow of warm currents in the Atlantic, causing the climate to get cooler.

That could have led to human migrations in Europe, as people fled the disappearing coastline for warmer, dryer climates.