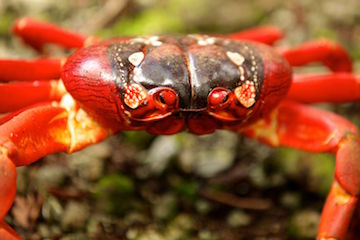 When the rainy season arrives on Christmas Island, usually in late October or early November, one of the world’s most amazing migrations gets under way. Tens of millions of red crabs leave the rainforest and head for the rocky beaches, where they breed. A couple of weeks later, the females they lay their eggs in the ocean. The eggs hatch as soon as they hit the water, and the larvae float at sea for weeks before returning to the island -- if they aren’t eaten by the giant whale shark, which shows up during the migration season to snack on the little critters.

Red crabs may be the most prominent creatures on Christmas Island, but they’re far from alone. The island is home to many species of crustaceans, fish, and seabirds.

Their home is the summit of a volcanic mountain that rises almost three miles from the floor of the Indian Ocean. The island was named by the captain of a ship of the East India Company when he spotted it on Christmas Day of 1643.

The island is a territory of Australia, which is a thousand miles away. Its 50 square miles are ringed by tall cliffs, which made it difficult to explore and settle. Coral reefs inhabit shallow waters just offshore, attracting more than 600 species of fish.

The cliffs are good homes for seabirds. That includes the Christmas Island frigatebird, which nests only on the island. Its population has dropped to just a few thousand, so the frigatebird is listed as critically endangered -- one of the rarest residents of Christmas Island.