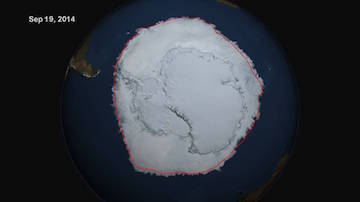 Pacific temperatures may have an impact as far away as Antartica. Photo Credit: NASA

Thanks to El Niño, most of us know that there’s a connection between water temperatures in the Pacific Ocean and weather patterns in North America. Warmer water in the eastern Pacific produces more water vapor in the atmosphere, which produces more rain in parts of the United States.

Pacific temperatures may have a big impact in other places as well -- as far away as Antarctica. A study found that an increase in the amount of sea ice around Antarctica could be driven by conditions in the Pacific.

The amount of sea ice increased slowly from the time satellites started looking down on Antarctica, in 1979, until about 2000. After that, the rate of new ice formation was five times faster. The total area covered by the ice reached its peak in 2014.

Researchers noted that the bump in the rate of ice formation corresponded to a switch in a natural cycle of changing surface temperatures in the Pacific. Temperatures in the tropical Pacific dropped, especially in the eastern Pacific. Cooler waters mean less evaporation, so less cloud cover and rainfall.

That change may have caused a big low-pressure system between Antarctica and the southern Pacific to intensify. That created stronger winds, which pushed ice away from Antarctica. As the ice departed, it exposed open ocean behind it. The exposed water froze, creating new ice.

There’s evidence that the Pacific cycle has switched to warmer temperatures in the last few years. That could mean that less ice will form around Antarctica in the years ahead.