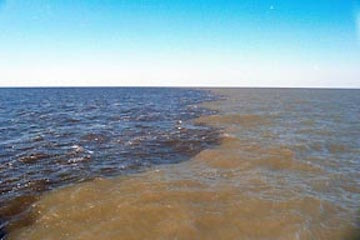 In most oxygen minimum zones, the concentration of oxygen is about a half to a third as much as in the layers above and below. Credit: National Oceanic and Atmospheric Administration.

Every year, a large “dead zone” develops where the Mississippi River empties into the Gulf of Mexico. It’s caused by a build-up of fertilizers and other nutrients that have washed down the river from farms and cities. They cause a massive bloom of algae. When the algae die, they drop to the bottom, where they’re consumed by bacteria, which use oxygen as part of the process. They use so much oxygen that there’s not enough for the fish and other organisms, which die off or move to waters that are more hospitable. There are hundreds of dead zones around the world -- most of them caused by the same process as in the Gulf of Mexico.

But there’s also another type of oxygen-poor zone. It’s caused mainly by natural processes. Known as the oxygen minimum zone, it’s in a middle layer of the oceans. There are big oxygen minimum zones in the Pacific, Indian, and Atlantic oceans. While some large organisms have adapted to life there, most can’t get enough oxygen to survive.

Several factors are involved in the formation of these zones. Surface winds and the contours of the ocean floor may keep the layers of water apart, so oxygen-rich water from the other layers can’t mix with the oxygen-poor water. And the same biological activity that creates dead zones also plays a role.