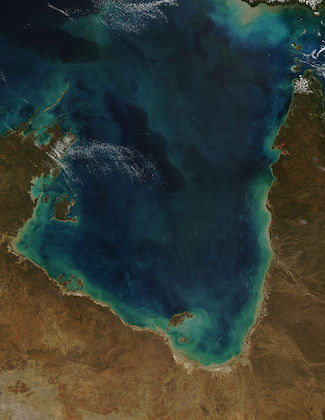 The northern coast of Australia looks like something is missing -- as though someone took a giant knife and carved out a square notch. But it wasn’t carved at all. Instead, it’s the result of flooding caused by rising sea levels after the last ice age.

The Gulf of Carpentaria covers about a hundred thousand square miles -- roughly the size of Colorado. At most, it’s about 250 feet deep, although most of it is much shallower.

More than 10,000 years ago, it consisted of a brackish lake surrounded by gently sloping land. As the ice melted at the end of the ice age, though, sea level rose by hundreds of feet. That flooded the surrounding landscape, and connected the lake to the ocean.

Today, the region has a tropical climate that’s dry in winter, but subject to big storms in summer. The storms can damage mangrove forests along the coast, but they also bring in fresh sediments that are rich in nutrients.

The area around the Gulf of Carpentaria is thinly settled by people. But the region is heavily populated by fish, birds, and other creatures. In fact, a large part of the gulf is protected as a marine reserve. It’s home to several threatened species of sea turtles, including the flathead and green turtle. It’s also a nesting spot or foraging grounds for the lesser frigatebird, the brown booby, and many other birds. And extensive seagrass beds near the shore provide habitat for shrimp and other fish and shellfish.

That helps create a busy haven for life in Australia’s northern “notch.”