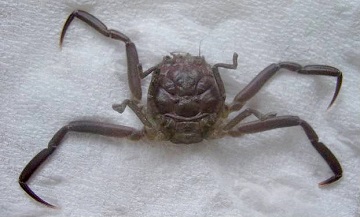 A small crab in Japanese waters has a pattern on its back that looks like the face of a fearsome samurai. Legend says the crabs are the reincarnated spirits of warriors of the Taira clan, who drowned themselves to avoid capture more than 800 years ago. Today, the scientific name for the crabs honors the warriors: Heikeopsis japonica -- the Japanese Taira clan.

The name follows an international set of rules for naming organisms. The terms provide a better way to classify life than common names -- things like red drum or red snapper -- because one species may have many different common names, or a name may apply to more than one species.

Scientific names have two parts. The first describes an organism’s genus, which is a group of related species, while the second describes the individual species.

Some names are based on where the organism is found. Doris wellingtonensis, for example, is a sea slug near Wellington, New Zealand. Others include the names of people: Phialella zappi is a jellyfish named for Frank Zappa.

And still others describe an organism’s appearance. A small fish with big eyes, for example, is known as Boops boops -- “cow eyes.” And a squid with glowing red eyes is Vampiroteuthis infernales -- “vampire squid from hell.”

A couple of decades ago, biologists changed the name of a fossil clam. Theora mesopotamica may be better science than an earlier name, but it’s not as much fun. A discoverer thought of the clam as being like a cadaver, so he gave it a cadaver-sounding name: Abra cadabra.