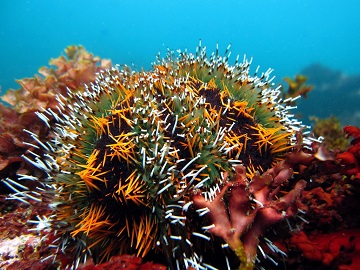 Sea urchins have some of the best defense mechanisms around. Sharp spines jab any predators that try to grab them. And tiny, venomous fangs on the end of long stalks snap at the predators.

One species of urchin adds one more layer of defense. It can launch hundreds of the little fangs into the water around it. That creates a defensive screen that helps keep the predators at bay.

The collector sea urchin is found in warm, shallow waters at several locations around the world. It’s most common in Australia, especially on the Great Barrier Reef.

The spaces between the spines on its shell are covered with the biting appendages, known as pedicellariae. Each of these has three “jaws” that open like a blooming flower. And each jaw is tipped by a fang that can inject venom into fish that are threatening the urchin.

Researchers in Australia studied the collector and four other species of urchin. And they found that when the collector is threatened -- when it’s touched, or when it notices a shadow passing over it -- it can launch dozens or hundreds of pedicellariae in just a few seconds. The jaws repeatedly snap open and closed -- ready to give any threatening fish a good nip.

The researchers also found that fish stay away from the snapping jaws, and avoid the water downstream of an urchin that might have launched a salvo.

The collector is the only species of urchin that forages both day and night. That could be because of the extra layer of protection -- a cloud of “fangs” ready to take on any threat.