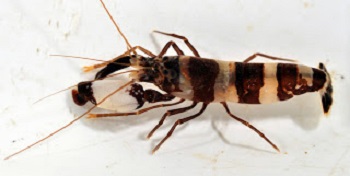 Ocean creatures don’t have to be big to be loud. One of the loudest of all is only a couple of inches long. But it produces “bangs” that are louder than a gunshot. And biologists are just beginning to study what makes them pop off.

Snapping shrimp are found in coral and rocky reef systems around the world. They look like tiny lobsters, with one claw that’s much bigger than the other.

The shrimp makes sound by snapping that claw shut at up to 60 miles per hour. That creates a bubble that pops with a loud bang and a flash of light -- all in less than a thousandth of a second. That can stun prey, and perhaps scare away predators.

There can be so many shrimp that their pops can dominate the underwater soundscape. Because of that, it’s possible that other marine creatures use the sounds to navigate through the reef, or to disguise their own sounds from predators.

Scientists are just starting to investigate why the shrimp snap. Studies in recent years are showing how the snapping varies by location, time of day, season, and other factors. Shrimp off the coast of North Carolina, for example, were found to be more active in summer than winter. But they were more active during the daytime during the winter.

And another study, in the Caribbean, found that the shrimp on one reef were especially “snappy” at dawn and dusk. But there could be big differences from one reef to the next.

These studies show that there’s still a lot to learn about these little but loud creatures.