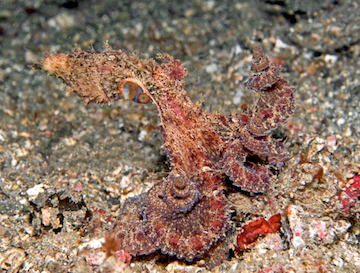 The algae octopus uses an elaborate camouflage scheme to stay safe. It can change the color and shape of structures on its body and arms to make it look like an algae-covered shell.

When that doesn’t work, though, it has another defense mechanism: Run! It can hoist its body on two of its eight arms and skedaddle, running as fast as it can swim. In fact, it’s one of only two species of octopus that’s known to run on two “legs.”

The algae octopus is one of the smallest of all octopuses. Its body is typically only two or three inches long, with its arms stretching perhaps 10 inches. It’s found in shallow coastal waters around Indonesia, the Philippines, and northern Australia. It builds dens on the sandy ocean bottom, and sometimes piles up rocks around the entrance to keep itself safe. It feeds during the day, generally on small crabs. And it’s been known to carry the leftover shells away from the den -- perhaps another defense mechanism.

When the algae octopus mates, the male sometimes stands guard around the female, who retreats to her den. Even so, other males sometimes sneak by -- they move slowly, and use rocks and other obstructions for cover.