A scallop’s best friend just might be a big shark.

A recent study concluded that the lack of big sharks is helping wipe out beds of bay scallops along the East Coast. The study shows once again that weakening one link of the global food chain can have an impact on the others. 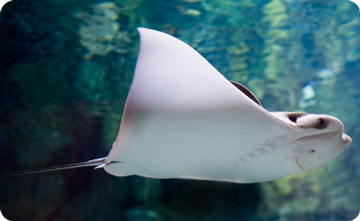 A team of researchers found that the populations of 11 species of large sharks -- those around seven feet or longer -- have declined dramatically over the last 35 years. At the same time, the take of bay scallops has dropped to near zero in some places.

The researchers concluded that without the big sharks to thin their numbers, several species of small sharks, rays, and skates have experienced population booms. These small predators are gobbling up the scallops and other shellfish, and disturbing the seagrass beds that they live in.

To test the conclusion, researchers built stockades around beds of shellfish off the coast of North Carolina. They kept out the cownose ray, but allowed other types of fish to come and go. The cownose ray eats lots of scallops, and its numbers have increased ten-fold in recent decades. In the protected areas, the scallops did well. But beds without protection were decimated.

Commercial fishing operations and individual anglers catch and kill huge numbers of sharks. Without these top-level predators in the food chain, some other links are strengthened, while still others are weakened. And that means fewer scallops to simmer in garlic butter.