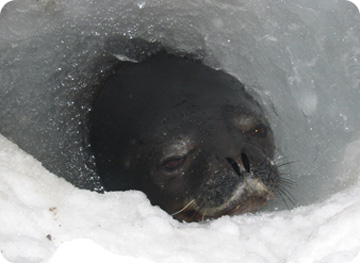 Like any other mammal, a Weddell seal takes big breaths to prepare for a plunge into the water. Unlike most mammals, though, those breaths can keep the seal going for a long time. A Weddell can remain underwater for 70 minutes or more, dive thousands of feet, and cover distances of up to two miles.The seal does all this even though its metabolism is much higher than that of a land animal of the same size, so it consumes more oxygen. And after it gobbles a fish while underwater, its metabolism speeds up even more. A recent study found that after catching, eating, and digesting prey, a seal needed to breathe 45 percent more oxygen when it surfaced.

One way that a Weddell seal may conserve oxygen is to be careful with its swimming techniques. Every time it makes a stroke with its flippers, it consumes a lot of oxygen. To save its precious oxygen, it doesn’t take that many strokes to get where it wants to go.

When it dives, for example, the air in its lungs is compressed by the pressure of the water around it. When the seal reaches a depth of about 250 feet, it’s no longer buoyant, so it sinks -- something that takes no effort at all. And it can also conserve oxygen by mixing only a few flipper strokes between long periods of gliding.

So “taking it easy” can help a Weddell seal spend more time searching for food as it glides through frigid seas.