Some Hermit Crabs Buy Instead of Rent 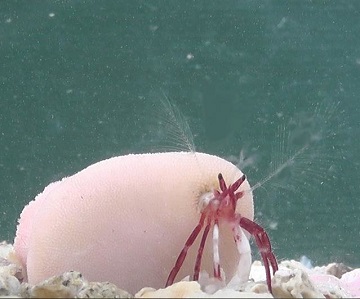 They say that home is where the heart is, and that is literally true with hermit crabs — they carry the shell that houses them wherever they go. Since hermit crabs steal their shells from other creatures, usually sea snails, their shells do not grow with them. So a hermit crab only leaves its shell when it has outgrown the home and moves into a larger one, sometimes even killing the shell’s current resident to acquire its new dwelling.

But a newly discovered species of hermit crab does things a little differently. Instead of moving house after outgrowing one shell after another, the crab known to science as Diogenes heteropsammicola picks a home that grows with it—and involves a bit of quid pro quo. Researchers from Kyoto University in Japan discovered the new crab species living in “walking coral,” a type of solitary coral usually inhabited by marine worms called sipunculans. Normally, the worms receive protection from the coral and benefit the coral by moving it around, preventing it from becoming buried under sediment. It’s an ideal symbiotic relationship—enough so that these new hermit crabs found it a good deal too.

Two types of walking corals will sometimes host a red and white D. heteropsammicola instead of a worm. Like sipunculans, these hermit crabs offer the living coral transportation, and they sweep away sediment that might otherwise threaten to bury the coral. The coral offers the crabs protection from predators, just as it does for sipunculans, while also growing with the hermit crabs. For this hermit crab species then, home is where the coral is.