A Mystical Name for a Magnificent Fish 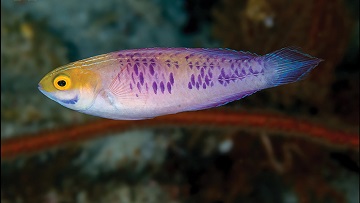 Descending several hundred feet toward the twilight zone of the ocean, there’s usually too little light to perceive any colors. Many creatures are visible primarily because of their bioluminescence – the dim, glowing light they produce. But one hardy little fish living on deep reefs in the Indian Ocean has defied the odds.

When scientists discovered a new, species of fairy wrasse off the coast of Zanzibar, Tanzania, they were surprised that the deep purple of its scales was visible more than 200 feet deep. Given the fish’s location and color, the biologists settled on an appropriately fantastical scientific name: Cirrhilabrus wakanda.

Wakanda is the fictional African country of the superhero Black Panther in the Marvel Comics, and it’s the name of the bright purple heartshaped herbs that grow only in Wakanda. These fantastical herbs give Black Panther his mystical powers of strength, endurance, and healing. In comic book mythology, those purple herbs came from a plant that mutated after a meteorite landed in Wakanda. The meteorite was full of the fictional element Vibranium, the metal that built Wakanda and its remarkable technology. And so the Wakanda fish’s common name is the Vibranium Fairy Wrasse.

One of the scientists from the University of Sydney who found the fish, said in a press statement, naming it after Wakanda felt natural given the “secretive and isolated nature of these unexplored African reefs.” And the purple chain-link pattern of the fish’s scales called to mind the tough fabric of Black Panther’s suit and the patterns on Wakandans’ clothes. As the scientists continue to explore these deep reefs teeming with life, perhaps they’ll come across a Hulk or Daredevil of a fish.