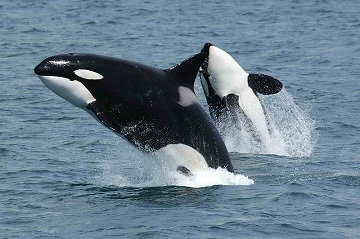 Even great white sharks flee an area when a group of killer whales comes around. Credit: NOAA

Most people think of great white sharks as the top predator of the sea, and they are among the largest, most ferocious sharks swimming around. But even white sharks fear another predator—possibly a surprising one. Orcas, commonly called killer whales, may seem friendly when performing tricks at some amusement parks, but just their arrival is enough to send white sharks packing.

Around the Farallon Islands off the coast of San Francisco, California, white sharks frequently spend a month or so hunting young elephant seals. Yet when orcas periodically dropped by to hunt the seals, biologists repeatedly observed the white sharks immediately fleeing the area. In fact, the sharks often stayed away “up to a year, even though the orcas are only passing through,” according to Monterey Bay Aquarium senior research scientist Dr. Salvador Jorgensen.

The researchers analyzed data from 165 white sharks who had been tagged between 2006-2013 and combined it with seal, orca and shark survey data at the Farallones over a 27-year period. Every time orcas entered the area, white sharks disappeared within minutes and didn’t return until the following season.

The sharks fleeing the area has been a boon to the elephant seal colonies, biologists learned. During seasons when the white sharks took off early, four to seven times fewer elephant seals ended up as shark food. The orcas, which sometimes left the area within an hour, did not stay long enough to eat as many of the seals as the sharks would have. It wasn’t clear whether the orcas ever directly targeted or confronted the sharks, but it was clear the sharks didn’t plan to give them the opportunity.