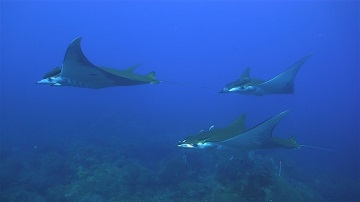 Devil rays, and their cousins manta rays, are known for putting on spectacular acrobatic shows, jumping and twisting in the air. They grow up to 13 feet across and typically live offshore throughout the world at latitudes where the surface waters are warm. But scientists have learned that devil rays don’t always stay in the warm shallow waters. Besides leaping toward the sky, these rays also regularly descend very deep into the ocean.

Most likely, these creatures dive to feed on the plentiful fish and invertebrates found in these dark, cold waters, but it’s no small journey for a smorgasbord. About once a day, the devil rays plunge over a mile straight down in less than 30 minutes and then gradually ascend over an hour and a half. Or, they drop down half as deep and hang out there for up to 11 hours at a time.

Either way, temperatures at those depths range from 35° to 37° F, so it’s no surprise that the rays take the chill off by spending a lot of time in shallow, warm waters, especially just before and after a dive. Gliding through these shallow waters makes for a spectacular show when the rays leap, twist and turn in the air, more than a mile above where they lunched a few hours earlier.